Everything’s Going to Be All Right
Rudi Kargus, room 304

Everything’s Going to Be All Right

304 Everything’s Going to Be All Right
by Rudi Kargus

Rudi Kargus recalls how he used to be very much in the spotlight. All eyes were on him, and it was not always enjoyable. Today he has a skeptical view of contemporary media, and he is wary of rash exaggerations and public condemnations. “The developments in the media are headed towards increasing simplification and banality.” His own biography supports this observation. Until 1990 Kargus was one of the most successful soccer goalies in the history of the Bundesliga. His record as an "eleven-meter killer” is still unbeaten. And he was always a focus of public attention.

Getting to know the paintings of Rudi Kargus, automatically means becoming acquainted with Kargus as an individual and with his personal development, although this is not what Kargus is seeking.

Art should speak for itself, without any big explanations or big words. At the same time, art itself should raise questions, reveal things, and touch people in a lasting way in a world that is moving faster and faster—a world dominated by the media, which highlights an event or situation only as long as it takes for the next one to appear on the horizon. Then the old topic is forgotten, regardless how important it might be to keep reporting about it, to undertake a deeper and sustained investigation. In Kargus paintings, information is preserved, even if in an encoded form. It remains visible and is conceived to engage the viewer in a sustained manner, causing one to reflect on what is happening in the real world and within oneself.

It therefore seems natural that the artist draws much of his inspiration from newspaper images (see the installation in the doors of the closet along one wall of the room). These images are collaged into new compositions and then incorporated into paintings. Kargus works both figuratively and abstractly. Always expressive, often wild, and with an alternation of a controlled and free painting style.

The artist is not merely interested in depicting something. Instead, painting is an act of protest against the current state of the world. There is nothing benign or decorative about his work. Showing an abstract landscape or images of broken-down spaces, protective gear, and masked faces, he portrays the great masquerade of a highly ambivalent world.

These images and the studio-like concept of the room, which was developed with the artist, are intended as a means of stimulating and inspiring viewers to assume the interpretive authority over these mysterious visual narratives.

Born in 1952 in Worms, Rudi Kargus was a highly successful goalie in the German National League and a member of the German national team from 1971 to 1989. In 1990 he hung up his goalie gloves and began to dedicate himself intensively to painting. He had taken courses with various teachers, including Professor Markus Lüpertz, and has been taking part in regular exhibitions since 2005. Kargus lives and works in Hamburg. 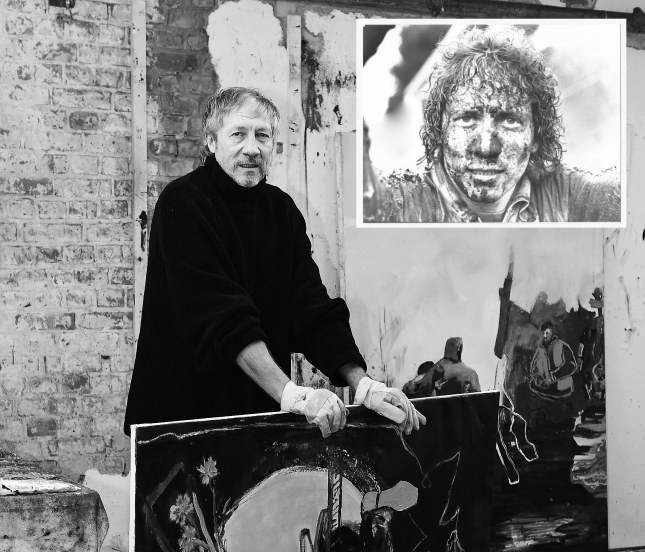